A Career of Communication and Negotiation

His gait has slowed a bit but his mind is as sharp as ever. And with that sharp mind, Tom Kostes has helped negotiate every North Palos SD 117 contract for nearly 50 years, as a superintendent and as a board member.

“I just love being part of the negotiating teams,” said Kostes, who began his tenure in District 117 as assistant superintendent in 1973. “I knew nothing about the negotiating process. I mean nothing. Chuck [Feigl, then the district superin­tendent] told me at the time ‘you’re going to learn. And I did. Boy, did I ever. … The key is keeping an open dialogue.” 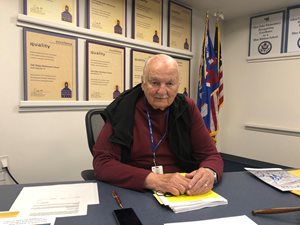 The amiable Kostes was named superintendent in 1976, after the passing of Feigl, and held the posi­tion for 18 years. During his tenure the district, after 11 tries, passed a tax rate referendum in November 1993.

“It was the greatest feeling … when we passed that referendum,” Kostes said. “It meant so much to the district, students, and staff who had worked so hard. We got to the point where we were going to sell the buses to put money in our education fund. That’s how desperate we were.”

Kostes said it was important for him to visit the schools every month and observe and talk to teachers and principals. “I’d sit in the school libraries and teachers could talk to me about anything, except grievanc­es,” he said. “That was not open for discussion.”

Kostes retired in 1994 and Ken Geraghty took over as superinten­dent. Kostes stayed on as a consul­tant to the superintendent, a position he held through 2003. In 2006, he was asked by then-Superintendent Ken Sorrick to fill an unexpired term could be part of the negotiating team,” Kostes said.

He has served as president of the board for the last eight years. “We’ve had a great mix of people on the board who bring their own unique strengths and perspectives to issues. You’re always going to have differences of opinion, and that’s good,” Kostes said. “You need that. Our job as a board is to make the superintendent’s job as workable as possible. How can we make his/her goals more attain­able?”

He said while District 117 has had some really out­standing superintendents, “current Superintendent Jean­nie Stachowiak is probably the best one we’ve ever had.”

Kostes’ mind is always working. “How are we doing on bus drivers?” he queries the transportation director during a recent board meeting. “Did that new restaurant on 95th Street open up yet?” he asks no one in particular in a reference to future tax dollars to the district. “What’s the current enrollment?”

Reflecting on the last eight decades, Kostes credits his wife Carolyn and his family. “I’ve been lucky,” he said. “Very lucky. I have a great wife, great kids and grandkids. “I’ve had great jobs and I’ve had/have great friends. Ken Geraghty is one of those great friends with whom I still talk to five times a week and play golf with once a week weather permitting.”

A hip replacement in 2010 forced Kostes to use a cart rather than walk the courses.

Geraghty said Kostes has been more than a great friend. “He’s been my mentor. He taught me a lot when I was assistant superintendent. We discussed everything back in those days regarding education. “We didn’t always agree on things which was a good thing. He told me once that if we agreed on everything, one of us wasn’t needed.”

“Tom showed me that it is all about how you talk to people, Geraghty said. “Tom also gave me confidence. Probably the greatest compliment I can give Tom is he is such an honest man. He is — and has always been — about what is best for kids.”