Letter: A Snapshot of My Feelings Now 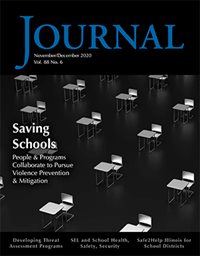 When I first saw the cover of the November/December Journal, I was a bit jolted. It was so stark, and a bit scary. But then I thought, “It is stark and scary.”

We are in a “Twilight Zone,” and I feel it is especially stark and scary in education: boards of education, administrators, teachers, staff, and most of all the students. The emotional damage will be deep and long-lasting.

But this is where hope comes in. I was 11 years old when Pearl Harbor was attacked. Early 1942 was a nightmare. The Japanese Navy controlled a large portion of the Pacific Ocean, the Japanese Army most of Southeast Asia. Germany controlled most of Europe and the Axis looked unstoppable. But our great nation got united and determined. Politics were put aside and the entire country focused on winning. And we did.

We need that kind of unity and determination now.

G. Howard “Bud” Thompson was president of the Illinois Association of School Boards in 1976 and 1977. A champion for arts education, he is an artist and business and community leader in Prophetstown.