The Illinois Association of School Boards welcomed new Directors from three divisions to its governing board. Mandy Rieman, Christopher Gordon, and Joyce Dickerson attended their first quarterly IASB Board of Directors meeting this past Saturday in Springfield. 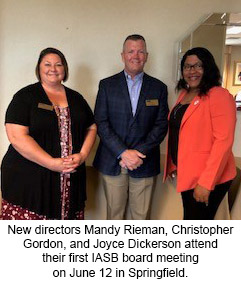 Rieman was elected May 6 to serve as IASB Director for the Wabash Valley Division. She is currently vice president of the Jasper Co. CUSD 1 school board.

Gordon was elected May 31 by Abe Lincoln Division members to serve as IASB Director. He is a member of the New Berlin CUSD 16 Board of Education.

Dickerson was elected June 10 at the South Cook Division Governing Meeting to serve as IASB Director. She is currently vice president of the Prairie Hills ESD 144 school board.

Egyptian and Three Rivers Divisions will also elect new directors at their upcoming Governing Meetings. Elected directors serve two-year terms and appointments may be made to fill the term until division elections.

The IASB Board of Directors includes one director for each of the Association’s 21 geographic divisions, an IASB Service Associate representative, and offices of president, vice president, and past president. A listing of statewide officers and directors of the Association is available on the IASB website.