IASB Board of Directors Update

The IASB Board of Directors met twice in November to conduct its quarterly business meeting and to reorganize following the election of a new president and vice president.

Board updates on November 18 included meetings with the State Superintendent and future work to review the IASB Resolutions Process and Constitution. Directors also took action to end membership with the National School Boards Association.

The action to terminate NSBA membership affirmed prior action taken by the board this year to suspend dues payment. Board discussion on the issue included a review of challenges facing the national organization and consideration of local boards that participate in NSBA programs and events. IASB Executive Director Tom Bertrand reported on regional meetings with other state association executives. Bertrand acknowledged the importance of national networking and development and also noted IASB staff involvement in federal advocacy efforts.

Under board learning, directors were updated on a recent meeting of school board members and representatives from the Illinois State Board of Education (ISBE). IASB facilitated the meeting to allow board members representing a cross-section of the state’s school districts to share current issues and challenges with State Superintendent Carmen Ayala. Eighteen board members participated in the first meeting, including IASB Directors Tracie Sayre (Two Rivers) and Joyce Dickerson (South Cook). Three more meetings are scheduled.

Also at the November 18 meeting, the board also received an update on Joint Annual Conference activities set to kickoff the following day. 2021 Conference co-chairs were Michelle Skinlo, Sue McCance, and Tracie Sayre. 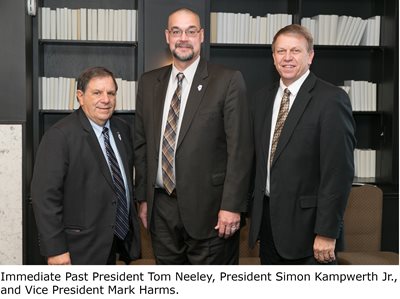 On November 21, the final day of the Joint Annual Conference, the directors met again to reorganize under new leadership. Simon Kampwerth Jr. was elected IASB President and Mark Harms as Vice President at the IASB Delegate Assembly. Tom Neeley is now Immediate Past President. Director Tim Custis representing the Central Illinois Valley Division was elected Treasurer for a two-year term. 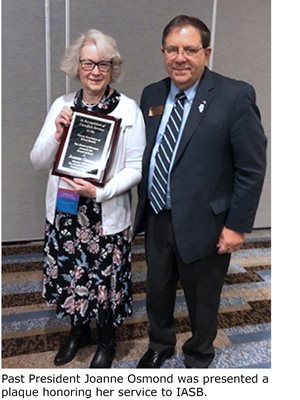 Past President Joanne Osmond was presented a plaque to recognize her years of service to the IASB Board of Directors. Osmond was the 2017-2019 IASB President and 2015-2017 Vice President. She served as director for the Lake Division for nine years (2005-2014) and chaired several IASB and NSBA committees during her time on the board.

Osmond thanked the board and IASB staff for their continued support and reflected on her time serving on the IASB board:

“My love for policy and procedure I never would have realized if it hadn’t been for the work I did with this board and the previous boards. It has been a truly amazing experience.”