The 2020 edition of the influential PDK Poll of the Public’s Attitudes toward the Public Schools demonstrates that public education opinions do not escape the political visions that divide the nation. The 2020 poll report is titled “Public School Priorities in a Political Year.”

Produced by PDK International in its 52nd year of conducting the poll, the 2020 publication is designed to “shed light on gradual changes in Americans’ beliefs and attitudes about the public schools,” and includes questions about teacher quality, standardized testing, and challenges facing public K-12 education. This poll was conducted in March 2020, so questions did not include the questions about the worldwide coronavirus outbreak and the racial justice issues now facing the nation.

“In keeping with our previous 51 polls,” says Joshua P. Starr, the chief executive officer of PDK International, “it takes the long view, gauging Americans’ gradually shifting views on public education, rather than capturing their immediate responses to the current crisis.”

Notable findings include a “vast partisan divide” on the federal government’s performance on education issues, and that 60% of respondents consider public K-12 education a factor that will determine their vote this fall. Among parents, 86% said they wanted the federal government to improve “Efforts to attract and retain good teachers,” while 46 percent – the lowest such tally – want a federal focus on “The expansion of charter schools.”

According to the report, “While they express broad support for an increased focus on educational priorities, ranging from teacher retention and college tuition to anti-discrimination efforts and pre-K programs, support for expanded efforts falls far shorter in one area: charter schools.”
Another survey focus area was testing, and results showed that, similar to in past years, respondents believe there’s too much emphasis on standardized testing. The 2020 PDK Poll also asked about problems facing the public schools, substance abuse, school vouchers, diversity, approaches to reading and literacy, and the confluence of social justice issues and school safety.

“It’s no surprise that Americans of different racial backgrounds and political leanings feel differently about this issue, but a majority of all respondents believe it’s important to protect students,” said Starr. 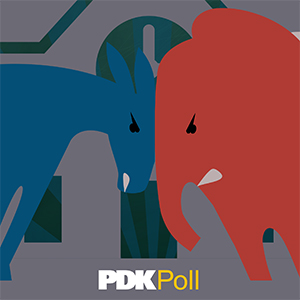