The IASB Resolutions Committee met August 7 to consider and make recommendations on new proposals submitted by Association member districts. The report summarizes proposed resolutions for 2020, district rationales for the submitted proposals, and the Committee’s recommendation on each resolution.

Resolutions seeking to address the teacher shortage in Illinois, permit remote learning on Election Day or other days a school is mandated to be used for a public function, and allowing for local control of school closing decisions during a pandemic all received “Do Adopt” motions from the committee.

Recommendations of “Do Not Adopt” included measures on the establishment of a loan program for school districts, gun storage legislation, making state school report card data available by June 1, and pre-K teacher licensure recommendations. An additional resolution on local control for school districts during a pandemic also received a “Do Not Adopt” recommendation as it was similar to a separate resolution that the Committee had already recommended be adopted.

The proposed addition to IASB Belief Statements regards educational equity. The statement reads, “The Illinois Association of School Boards urges its member districts and the leadership of member districts to integrate the principles of equity and inclusion in school curriculum, policies, programs and operations, ensuring every student is welcomed and supported in a respectful learning environment.”

Further details on all the proposed resolutions and the rationales for the Committee’s recommendations are available in complete Resolutions Committee Report. Also included are a number of amendments to and deletions of out-of-date or no longer relevant position statements.

Resolution proposals are submitted each year by IASB member school boards. IASB staff works with the sponsoring district by reviewing and researching proposed resolutions to provide background on current law. Then, each proposed resolution is reviewed by the Resolutions Committee, made up of 21 school board members representing each of the Association’s divisions. The committee recommends to either “Do Adopt” or “Do Not Adopt” on each proposal. Sponsoring districts have the opportunity to appeal “Do Not Adopt” recommendations during the Delegate Assembly.

Because of the virtual nature of the meeting there will be limited back-and-forth discussion on proposed resolutions during the day of the Delegate Assembly. Instead, delegates will have two opportunities prior to the Assembly to debate and discuss proposed resolutions. On October 21 at noon and November 5 at 6 p.m. virtual discussions are scheduled to allow delegates to ask questions regarding the resolutions and debate the proposals.

IASB member boards are encouraged to review the Resolutions Committee Report in order for district delegates to be able to make informed votes during the Delegate Assembly. The decisions reached by member boards of education determine the direction of the Association’s advocacy efforts and major policies on behalf of its members. 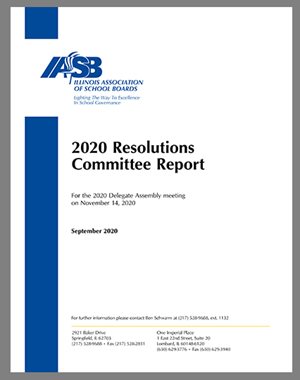