Board turnover rate dropped in 2019

The April 2019 election saw more incumbents re-elected to local boards of education in Illinois, according to board member data from the Illinois Association of School Boards. The turnover rate of Illinois school board members was 18 percent.

It is the lowest turnover rate on record. The highest rate, 24.6 percent, was in 1997 when the Association first began tracking turnover of member boards at the biennial elections. The previous election in 2017 had a turnover rate of 19.5 percent when 1,149 new school board members were elected. 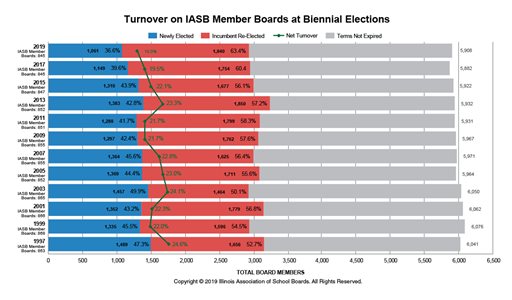 “Historically, the turnover rate of school board members has been a little over 20 percent,” said IASB Deputy Executive Director Ben Schwarm. “The lower number this year may indicate stability in the local districts as well as voter satisfaction with the incumbents who were up for reelection.”

Most governing school boards in the state consist of seven members elected to serve four-year terms. Terms are staggered so there are three or four seats contested at each election, held the first Tuesday in April of each odd-numbered year.

IASB has reported turnover rate for the past 22 years based on membership records. Currently 847 of 850 public school districts in Illinois hold active membership in the Association. Historical board member turnover data is available here. 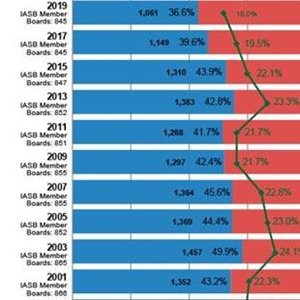