The IASB Board of Directors met twice in Chicago during the Joint Annual Conference. The first meeting was to review member services and take action on a revised dues formula. The second meeting was to elect the treasurer and Executive Committee and make committee assignments.

On November 21 the Board approved modifications to the member dues formula. The changes allow for use of more current data accessible in the State Board of Education’s Evidence-Based Funding model. Under the new formula, no member district will pay more in dues for fiscal year 2021. Dues notices will be mailed to districts in May 2020.

It was the final meeting for Immediate Past President Phil Pritzker. Pritzker has been active on the IASB Board of Directors since 2009, serving as North Cook Division Director, Executive Committee member, vice president, and president. He is president of the Wheeling CCSD 21 Board of Education.

“It’s been a great journey,” said Pritzker. “I’ve learned so much by being a part of this group.”

Thomas Neeley, Morton CUSD 709, is now the president of the Illinois Association of School Boards. The vice president is Simon Kampwerth Jr. of Peru ESD 124. Both were elected, on November 23 at the Association’s Delegate Assembly, to serve one-year terms.

The next meeting of the Board of Directors is scheduled for March 6-7, 2020 in Lisle. 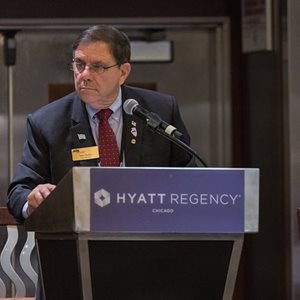